The use of controlled terminology (CT) is vital to successful clinical study build, however, understanding the concept and its various subsets can be a challenge.

In clinical trials, CT can be referred to in a number of different ways, such as:

While these terms are related, they don’t all mean exactly the same thing.

Let’s start with the basics.

What is controlled terminology?

The SDTM standard for clinical data submission came about in the early 2000s as a joint project between the Clinical Data Interchange Standards Consortium (CDISC) and the US Food and Drug Administration (FDA). The standard was introduced to give some structure to the clinical data they were receiving.

The standard laid out the specific column headings that should be used to present collected data, in order to make it easier for submissions to be reviewed and approved.

However, CDISC quickly realised they needed to specify not only the column headings, but also the way the data itself should be presented.

To resolve this problem, industry regulators needed to specify exactly what the values within the columns should say for every submission. For example, they could specify that studies should use only ‘Y’, ‘N’, or ‘UNK’ for unknown.

These approved lists of controlled terminology are called code lists.

The advantage of code lists is that when a list has been specified, you can use that piece of metadata again and again on other questions. So, there’s no need for a unique code list for every column. But more importantly, data is standardized in a way that can be easily reviewed and analyzed by the regulator. This is the essence of what controlled terminology aims to achieve.

Recognizing CT as essential to ensuring that CDISC data standards could be applied consistently across all studies, CDISC partnered with the US National Cancer Institute to develop the CDISC NCI controlled terminology project.

However, this term requires its own examination.

What is SDTM controlled terminology?

Put simply, it refers to any controlled terminology used in the SDTM standard. However, it also refers to terminology outside of the CDISC NCI project.

There's a couple of scenarios where this might apply.

A custom domain is data that doesn't fit into the current standard, but you've collected the data and it's important for inclusion in your study. You can create your own custom domain or collection of data, and inside that domain you will have your own controlled terminology to help you analyze it. The SDTM guidance provides advice on how to create a custom domain. Then, as requested by the CDISC NCI project, you’ll submit it for inclusion in the project.

Note, if you use terms not in the NCI controlled terminology, this is flagged up during validation, however these are acceptable if explained in the reviewer guide.

This refers to any new terms not included within the existing code lists. For example, you might discover terms that aren’t on existing code lists but that are relevant and important to the specific study you’re running. As with custom domains, any new terms are required to be submitted to the CDISC NCI project for review and inclusion. They’ll check the term is valid and unique (ie not a synonym of an existing term).

In summary, SDTM controlled terminology mostly refers to the same CDISC NCI CT project, but it isn’t all of it. As we’ve seen, there can also be terms or entire code lists that are outside the scope of the project. 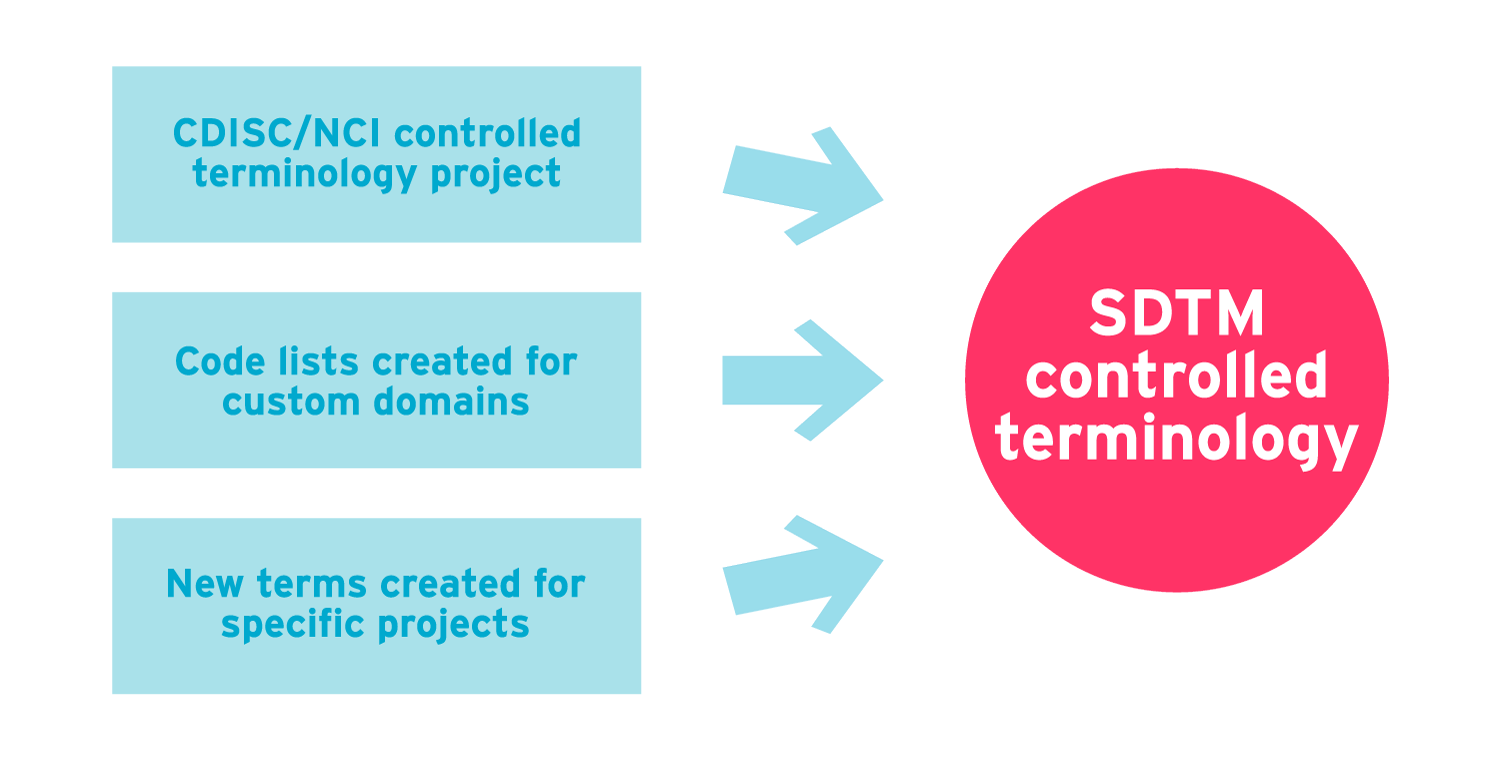 There are other controlled terminology projects separate to the CDISC NCI project, that are equally as important.

Here are three key projects to be aware of:

These are just three examples of control terminology projects that exist outside of the CDISC NCI project and are essential for analyzing adverse event profiles, medical histories, lab test codes and the concomitant medication profiles.

Study data that’s collected without controlled terminology in mind can require a lot of additional work to standardize it down the line. This can hold up the submission process and cost you time and money that’s better spent elsewhere. Therefore, it’s important to make sure data is captured in accordance with controlled terminology right from the start of the study design. This means creating case report forms that are set up to allow only the acceptable data to be collected.

For example, when it comes to recording the location of an adverse event, such as ulcers or skin lesions on the hand, it’s important to be as specific as possible. It must be aligned to the NCI terminology for anatomical locations, which is very extensive. The location of the adverse event can be narrowed down to individual digits or parts of the finger. In this case, instead of a free text field, users could be required to select an acceptable term from a drop-down list. This will make a huge difference to the quality and cleanliness of the SDTM data down the line, which in turn means that analysis is easier and you get clearer, deeper insights.

The moral: design your CRFs with controlled terminology in mind, to avoid the unnecessary programming headache later on. See our blog on everything you need to know about CRFs to learn the dos and don’ts of CRF design, or download our guide to common CRF problems and how to fix them at the button below.

A Guide to CDISC Standards Used in the Clinical Research Process 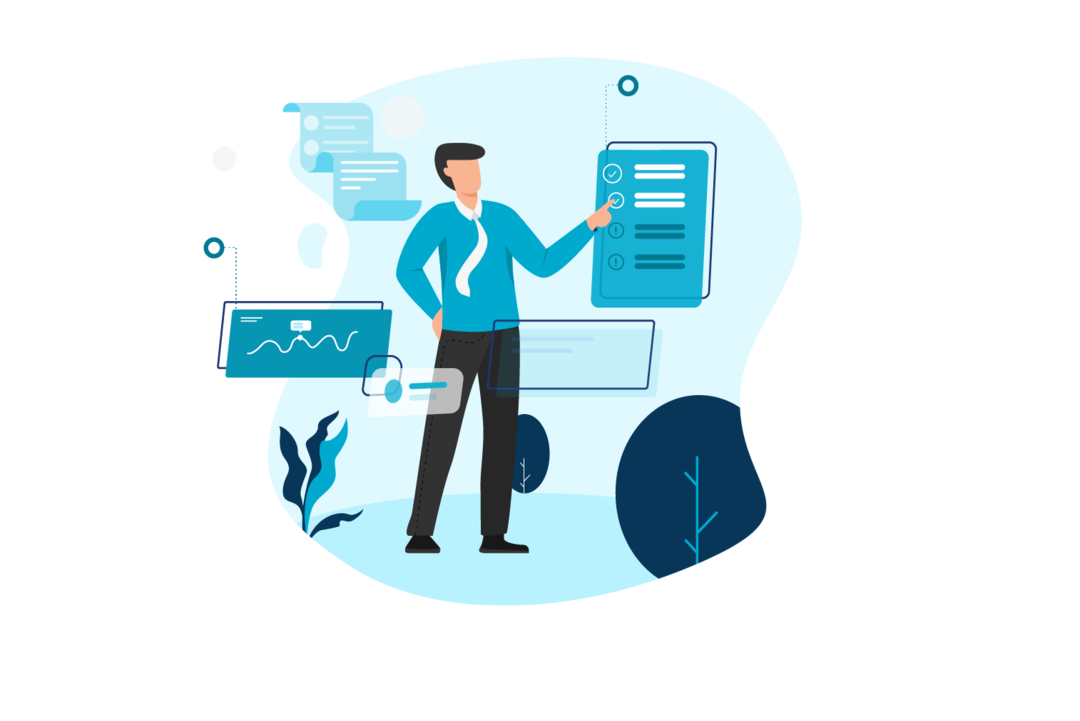